These days solo travel is a new and interesting trend. It gives travelers a sense of freedom where they can explore alone and face hurdles on their own.

First, let us begin with the safest place then, we go to the next section of our discussion.

Finland is known for its stunning landscapes, northern lights, and magnificent oceans. According to the travel and Tourism Competitiveness Report of the World Economic Forum, Finland is ranked number one in terms of Safety.

Tourism is a vital part of Finland’s economy and, that’s why they promote healthy tourism. In entire Europe, Finland is one of the safest countries for solo female travelers.

With spectacular mountains, national parks, lakes, waterfalls, rivers, and beaches, Canada grabs the attention of travelers. In all American countries, Canada has considered the safest country for solo female travelers.

New Zealand is yet another stunning country with grand landscapes, snow-capped mountains, rivers, beaches, and of course, generous people.

According to the survey of the Institute for Economics and Peace, New Zealand is the fourth safest country. New Zealand welcomes female travelers wholeheartedly and makes sure that their journey will be enjoyable with them.

Uruguay is a tiny country with mind-blowing beaches, shores, lakes, and mountains. It is very close to Brazil. The magnificent natural beauty attracts many female and male travelers. You won’t believe that Uruguay has some of the lowest crime rates in the Americas.

Switzerland is a dream destination for all of us. Do you also want to explore Switzerland alone? If yes, then don’t wait anymore, Switzerland is one of the peaceful and safest countries for solo female travelers. According to the Global Peace Index, Switzerland is the seventh most peaceful country in the world.

Belgium is one of the most stunning and photographed destinations in Europe. It has some spectacular lakeside houses, mountains, rivers, vibrant streets, and much more.

Among female travelers, Belgium remains at the top of the bucket list. In the report of the International Women’s Travel Center, Belgium ranked 10th in terms of best countries for women nomads.

Oh my God! How can we miss Austria? This European country is full of fun and happiness. The people of Austria are so welcoming that you never feel like an outsider.

It has the most spectacular mountains and hiking peaks that attract various female mountaineers from all over the world.  In the report of the International Women’s Travel Center, Austria ranked 4th in the list of best countries for solo female travelers.

Iceland is as beautiful as its name. 15% of the area is covered with ice. Its mind-blowing landscapes and ice-covered regions are tremendously famous among solo female travelers.

Among enthusiastic female explorers, Iceland is more noted because it has some of the lowest crime rates. If you look at the ranking index of the Global Peace Index, Iceland is on the number one rank.

Japan is one of the most beautiful countries in East Asia. It is also known as the land of sunrise. Tokyo is the spectacular capital of Japan, which is the hub of tourism and other fun activities.

Among Asian, European, American, and African women, Japan is quite famous for its civil laws and great hospitality. That makes it one of the safest countries for solo travelers. According to the Global Peace Index, Japan is 6th among the most peaceful countries in the world.

Every backpacker wants to explore Chile at once, whether it’s a female or male traveler. Its stunning architecture, marvelous culture, thrilling nightlife, exotic beaches, and delicious cuisine catch the attention of travelers.

You will be amazed after knowing that Chile has the lowest crime rate.  According to the Global Peace Index, Chile is 24th among the most peaceful countries in the world.

Now we are moving towards some of the places that are considered to be unsafe countries for solo female travelers. Well, we are living in the 21st century and almost every country has provided equal rights and security to the ladies. But still, some places might not be safe for travelers.

Most Dangerous Countries for Women

The U.S Department of State has issued a stern warning to female travelers to avoid traveling in Egypt. It is because of the increase in terrorist activities.

ISIS has committed various deadly attacks in Egypt, targeting government officials, public and tourist places, and market areas. Thus, it is not safe to travel alone for single women. Terrorism is the biggest hurdle in your fun.

This north African country has a high potential for terrorist violence against U.S citizens. The U.S Department of State also warns travelers about the crime of aggressive panhandling, street robberies, pick-pocketing, chain-snatching, and burglaries.

This is a very serious problem in all major city areas and tourist spots. Therefore, it is hard to travel alone for a woman traveler.

Resorts areas of Jamaica are quite safe, but if you go beyond this it will mean dealing with unwanted troubles. The state department also warns that violent crime is increasing day by day.

Particularly, Kingston and Montego Bay becoming a hub of violence. The massive violence against American visitors makes it one of the most dangerous countries for female tourists.

Afghanistan has now become the epic center of terrorism. Taliban captured Afghanistan and the situation of Afghani women is deteriorating day by day.  Many international agencies like the UN, UNESCO, World Bank warn tourists to avoid this place.

The crime rate against women has rapidly increased after the demolition of the Afghani Government. The active terrorism activities make Afghanistan one of the worst countries for women.

Massive terrorism activities and poor women’s rights make it one of the most unsafe countries for female travelers. Although Pakistan is a beautiful country to see, terrorism makes it hard for the traveler to explore the rich Islamic culture.

In terms of scenic beauty, the Bahamas is one of the most beautiful places to visit. But some provinces of the Bahamas are dangerous to explore such as Paradise and Nassau Island. These places have high criminal threat levels marked by the Department of State. Robbery, chain-snatching are very common there, so it would be nice if you avoid the Bahamas.

In terms of heritage and culture, Colombia is one of the richest countries in the world. It precisely preserved its ancient culture and roots. But some unwanted elements of society try to make the place horrible for visitors.

Robbery, sexual assault, chain-snatching are common nowadays. So for the safety purpose, you are suggested to avoid such places that are less crowded and dull.

Uganda is a beautiful country in South Africa, rich in natural resources and tribal groups. The indigenous tribal people are the biggest reason that makes Uganda one of the unsafe countries for female tourists.

They believe that outsider people are harmful to them and to protect their region they sometimes attack visitors. It might have some dangerous consequences.

Guatemala is undoubtedly a beautiful region but at the same time, the poverty rate is higher here. It leads them towards unethical works like robbery, murder, snatching, and pick-pocketing. The locals believe that American tourists have more money. So they can be an easy target for them.

Armed robberies, kidnapping, chain-snatching, pick-pocketing, credit card fraud are some of the common problems in Peru.

Peru is naturally blessed by beauty, mountains, rivers, and lakes. But some bad elements of society badly affect the image of Peru. And this led Peru towards one of the dangerous countries for solo female travelers.

Some Short and Helpful Tips for Solo Female Travelers

Look, we know you are a strong woman of the 21st century and you are able to take care of yourself. You will agree with the fact that not even a man can fight a thief who has carried a knife or any harmful weapon. So it’s time for some smart moves, not for muscle powers. Don’t you think it is a good idea? Why need to waste your energy when you can protect yourself with some smart moves like this;

WHO announced that a New Variant of Coronavirus is more dangerous than the last two variants. In order to control its transmission, more than 30 countries have closed their doors for any kind of traveling.

For the past two years, we have seen horrible situations all over the world due to the first and second waves of covid. If this time we couldn’t take any harsh steps, then the consequences would be more threatening.

Travel restrictions are the essential step in controlling the transmission of Omicron. It is advised to all travelers, don’t travel unnecessarily and without any precautions. If you want a secure environment for all, then please follow the guidelines of WHO and other medical associations.

Governments are adopting different parameters of border control with countries such as Japan, Israel, and Morocco closing their borders completely, while others have only tightened RT-PCR at the border.

The below-given map shows the current restrictions imposed by the different countries. 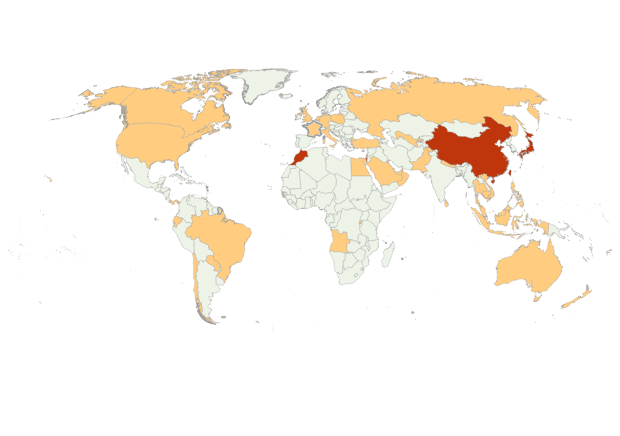 Japan: In the surge of the omicron variant, Japan closed its borders for all countries for one month. It includes international students, business travelers, and ten African nations including South Africa.

Morocco: Morocco suspended all International flights for two weeks. To stop the rapid transmission of Omicron, the officials of Morocco imposed a complete ban on international travel. They also start covid tests within their region so that any upcoming trouble can be handled easily.

Japan: Japan also completely banned the entry of any international traveler. For one month, no international flights or passengers are allowed to enter the country. Citizens of 10 African countries are totally prohibited in Japan, including South Africa.

Brazil: Brazil closed its border for South Africa, Namibia, Zimbabwe, Lesotho, Botswana, and Eswatini. Along with this, the covid test is mandatory for all domestic and international travelers.

Angolo: Angolo declared that it will close its borders for Tanzania, Lesotho, Malawi, Eswatini, Botswana, South Africa, Namibia, Zimbabwe, and Mozambique until the 5th of January.

Canada: Canada announced that all International travelers who come from any part of the world are required to submit negative Rt-PCR reports at the airport. They also closed their borders for Zimbabwe, South Africa, Botswana, Eswatini, Namibia, Mozambique, and Lesotho.

Australia: Australia hasn’t imposed a full ban on the International traveler but has taken some necessary steps to stop the spread of the omicron variant. It closed its border for Mozambique, Seychelles, Malawi, Botswana, Zimbabwe, Eswatini, Namibia, Lesotho, and South Africa for at least two weeks.

Indonesia: Indonesia banned all those International travelers who travel to Botswana, Zimbabwe, Lesotho, Namibia, South Africa in the last 14 days. Along with this, the RT-PCR test is mandatory for others.

Saudi Arab: Being a popular tourist destination in the world, Saudi Arabia is also closed its door for International travel including Botswana, Mozambique, Zimbabwe, Namibia, South Africa, and Eswatini.

Thailand: Due to the omicron variant, Thailand has also imposed strict restrictions on International flights and travel. Non-residents of Thailand have to submit a covid negative report on the airport and it should not be older than 72 hours. Travelers from South Africa, Botswana, Namibia, Zimbabwe, Malawi, Eswatini, and Mozambique are fully banned.

Sri Lanka: The sudden rise of the omicron variant frightening the officials of Sri Lanka. Thus, they imposed a partial ban on International flights and travel. Foreigners from South Africa, Botswana, Zimbabwe, Namibia, Lesotho, and Eswatini will be barred from entry.

The government is trying its best to stop the transmission of the omicron variant. Being responsible citizens we must support our government and other health organizations. Simply, we can follow the given guidelines and spread awareness in our locality about the consequences of the new variant.

So, avoid public places, don’t rush out without masks, use sanitizer and maintain social distance.